The exhibition ““Grandma March Day – cultural practices in the Balkans” was opened between 01.03.-09.03.2016 in Skopje, Republic of Macedonia. The event took place at the “Skopje City Mall”, with a presence of the organizers, public, representatives of several embassies (Romania, Bulgaria, Moldova) and Macedonian media at the official opeening on March 1, 2016 at 12 pm.. The official opening was followed by the speech of prof. Ljupcho Risteski (Institute of ethnology and anthropology, University of Skopje) and prof. Nikos Chausidis (Institute of art history and archaeology, University of Skopje), as well as by Ms. Desislava Ivanova (Director of the Mihalaki Georgiev Regional Library – Vidin, Bulgaria), Mr. Daniel Costache (Vise-director of the Buzau County Museum – Buzau, Romania) and Ms. Vasilka Dimitrovska (Director of HAEMUS – center for scientific research and promotion of culture – Skopje, Republic of Macedonia).. 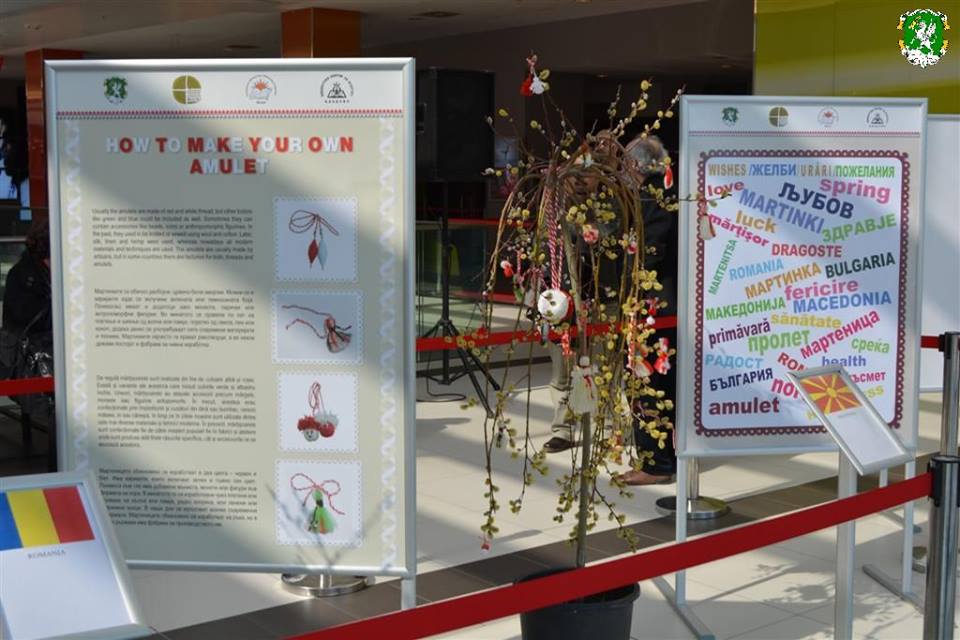 The big opening in Skopje on the 1 march 2016 hosted by HAEMUS (photos by Damjan Korubin) was followed by the opening in Vidin on the 11th March 2016 by the Regional Library Mihalaki Georgiev as a host, as well as the official opening in Buzau on the 15th March 2016 as Buzau County Museum as a host. 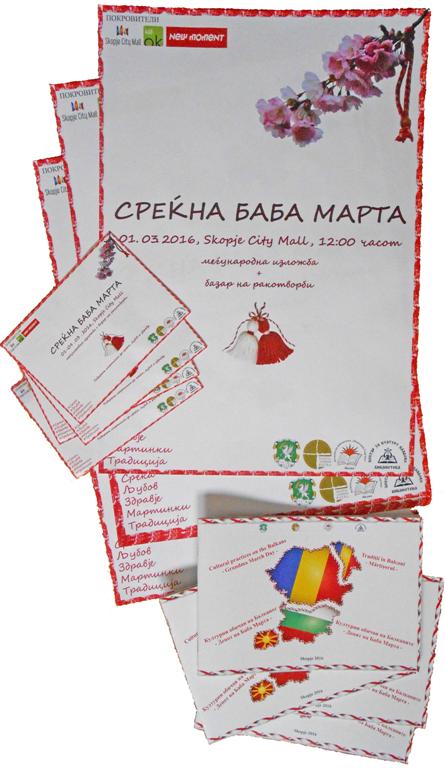 For the promotion of the event different types of materials were designed. For general public posters, flyers and catalog (in hard printing), for HAEMUS’s Social Media (Facebook, Twitter, Website) and for For Skopje City Mall and their Social media coverage (Vertical and Horizontal LCD banners, Facebook, Instagram and their official web site).

Visitors to the Skopje’s exhibition were able to see the panels in several languages ​​that explains customs associated with the Grandma Мarch Day in many countries, supplemented with hand-made amulets from Macedonia, Bulgaria and Romania hanging on a real small beautiful trees (Salix pendula). The artisans made the amulets on the spot and bazaar of handicrafts and creative workshops were organized within the exhibition. The display of Guinness martenitsa which was knitted on March 1, 2015 by a number of citizens on the square in the Bulgarian town of Vidin аs a part of the whole project was topic N.1 in Macedonian media.

The exhibition In Skopje was extremely popular and by public opinion, crossed the borders of each involved countries (Bulgaria, Romania, Macedonia) and engaged experts as well as the media from Balkan peninsula bringing on the daylight a topic less known for the tradition of the Balkan people. Occasionally, the info about the project appeared on the Frankfurt news in Serbian language, a newspaper which goes about 1 million prints per day.

One of the reasons to organize an international event such as this exhibition is an application to UNESCO to recognize traditional amulet martinki/mártenitsa/mărţişor as an intangible world cultural heritage and to support the ongoing UNESCO application supplemented by Macedonia, Bulgaria, Romania and Moldova.